24th July 1969: The day the Apollo 11 crew made it safely back to Earth and fulfilled the goal set by US President John F. Kennedy on May 25, 1961, "to perform a crewed lunar landing and return to Earth."

Following Lunar Module Eagle's successful rendez-vous with the Michael Collins who had been orbiting the moon in Columbia, the crew made a television broadcast to Earth, thanking those who had worked on the project and reassuring the world waiting below that they had complete faith in their equipment for a successful return.

The rescue team had been deployed to be at the ready in the Pacific ocean on July 12th, before Saturn V had even launched. However it was identified that a storm would be due to hit the planned recovery area which would damage the parachutes and potentially risk the lives of the crew. NASA were advised and so a Plan B recovery area was used instead.

Columbia made a successful splashdown on July 24th, albeit upside down. The crew activated flotation devices which righted the aircraft. The recovery team were the first to welcome the three crew back to Earth.

NASA was extremely cautious about the possibility of the astronauts bringing back lunar pathogens to Earth, so the equipment and astronauts were required to spend three weeks in quarantine. They were examined and declared healthy after their trip, then released from quarantine on August 10th 1969. 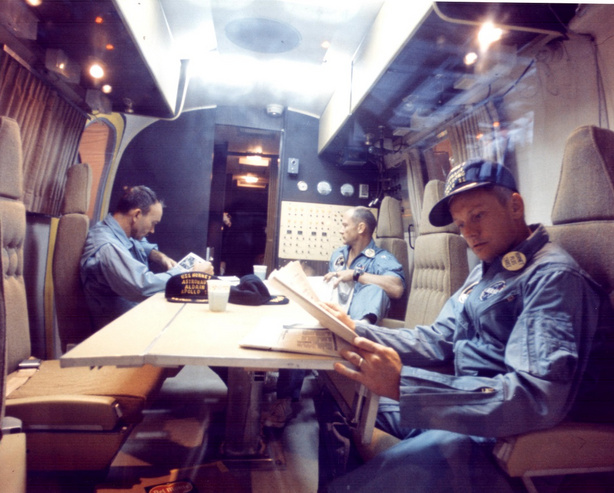 The three astronauts catch up on the news whilst in quarantine for three weeks.