2021 CIA ePlenary Meeting Highlights: Moving ahead after a year of CV-19

In December 2020, the International Ballooning Commission (CIA) Bureau announced their decision that the March 2021 CIA Plenary meeting would be conducted via Zoom meetings, certainly not unexpected. Then the meeting mechanisms were put in place, leading to a very successful series of meetings.

February 2021 meeting dates and times were scheduled for the sixteen CIA Sub-Committees (SC) and Working Groups (WG). SC and WG met across the four weeks in February. All meetings were set with a 2.5-hour timeslot. The challenge for all the meetings was to balance the starting times across the world time zones of SC & WC members.

Inevitably some attendees were on the calls at early hours, some at late hours. However, there was universal agreement that a positive of the Zoom meeting was that ALL committee members could attend ‘in-person’. Without the need to travel to a physical location with its attendant cost and time constraints, SC & WG members could slot out the on-line meeting time from their home base.

For some committee members, Zoom allowed them to ‘see’ their counterparts for the first time. And could share ideas within conversations ‘face-to-face’, rather than email exchanges. Everyone felt this was a real plus in the face of so many other life limitations due to CV-19. SC chairs and members decided to continue the Zoom meeting in the future, to allow for the complete group of members to convene ahead of the Plenary meeting. 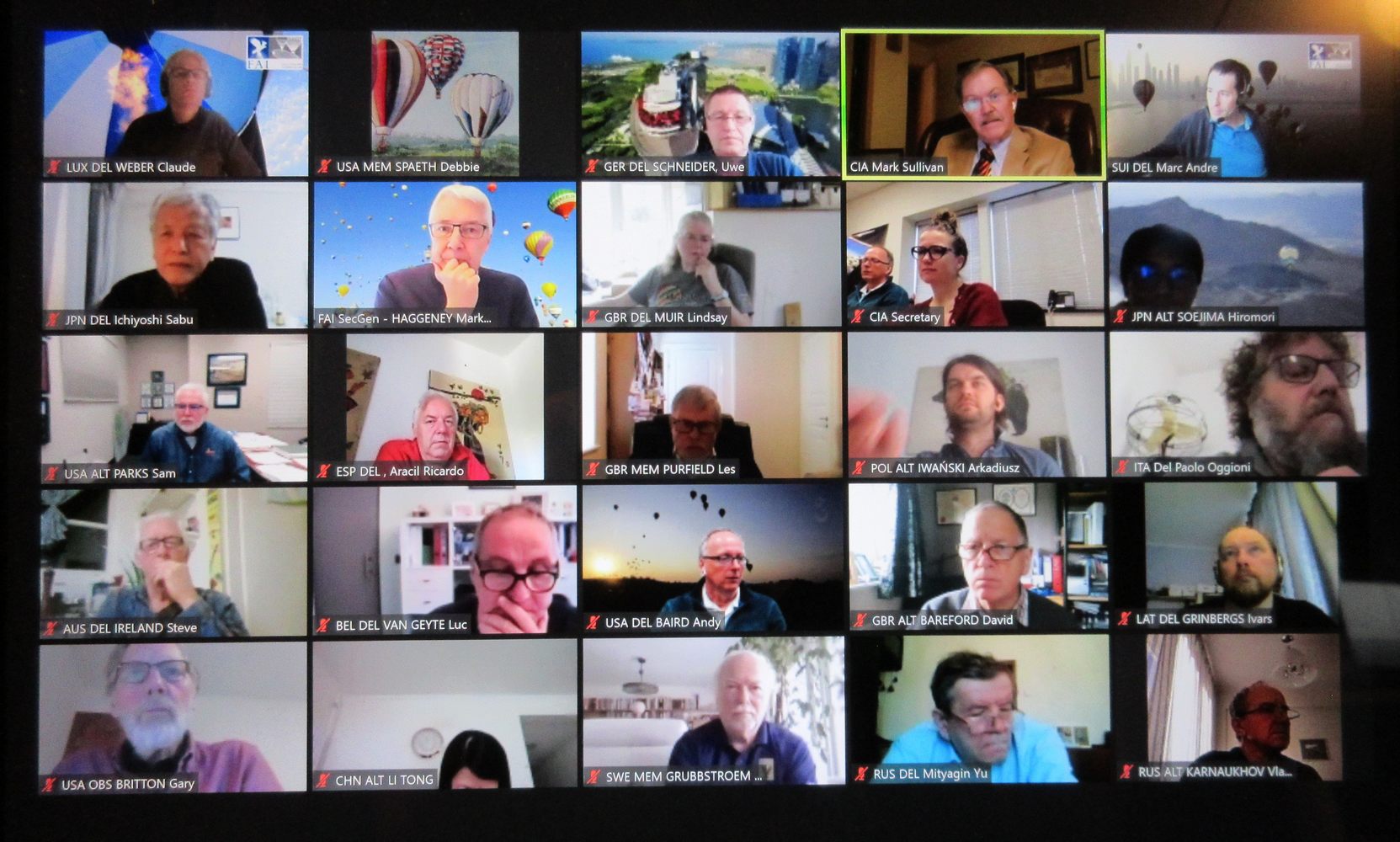 Balloonists from 31 countries participated in the CIA ePlenary Zoom meetings

Thirty-one countries were represented when the ePlenary meeting opened. Registered attendees numbered 67 including Delegates, SC Chairs and Observers. Details of shared presentations were coordinated between the CIA Secretary and the Chairs of the SC & WC. This went smoothly. 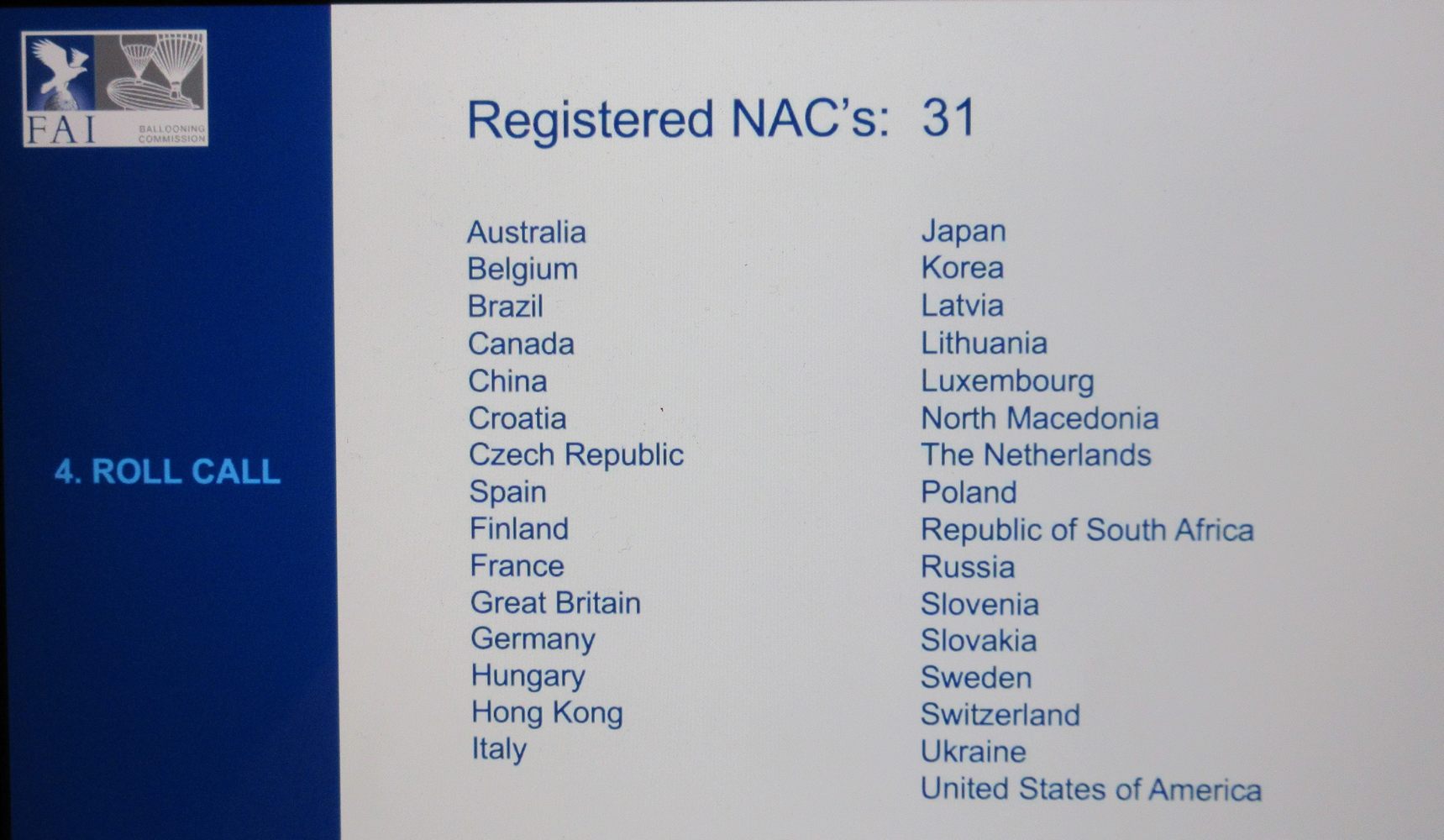 As with other large public gatherings, all the 2020 CIA sanctioned Ballooning Championship events were cancelled or postponed following the world shutdown due to the COVID-19 pandemic. Much time was spent talking about the 2021 outlook for events and options with various scenarios. Organizers will be keeping participants updated as conditions change, and new information is available in the host countries.

An update of the successful launch and the initial sale of (517) of the new FAI-CIA Balloon Live Sensor and App was presented. And the announcement of a Balloon Live Contest 2021, a World-side, decentralized competition was shared. 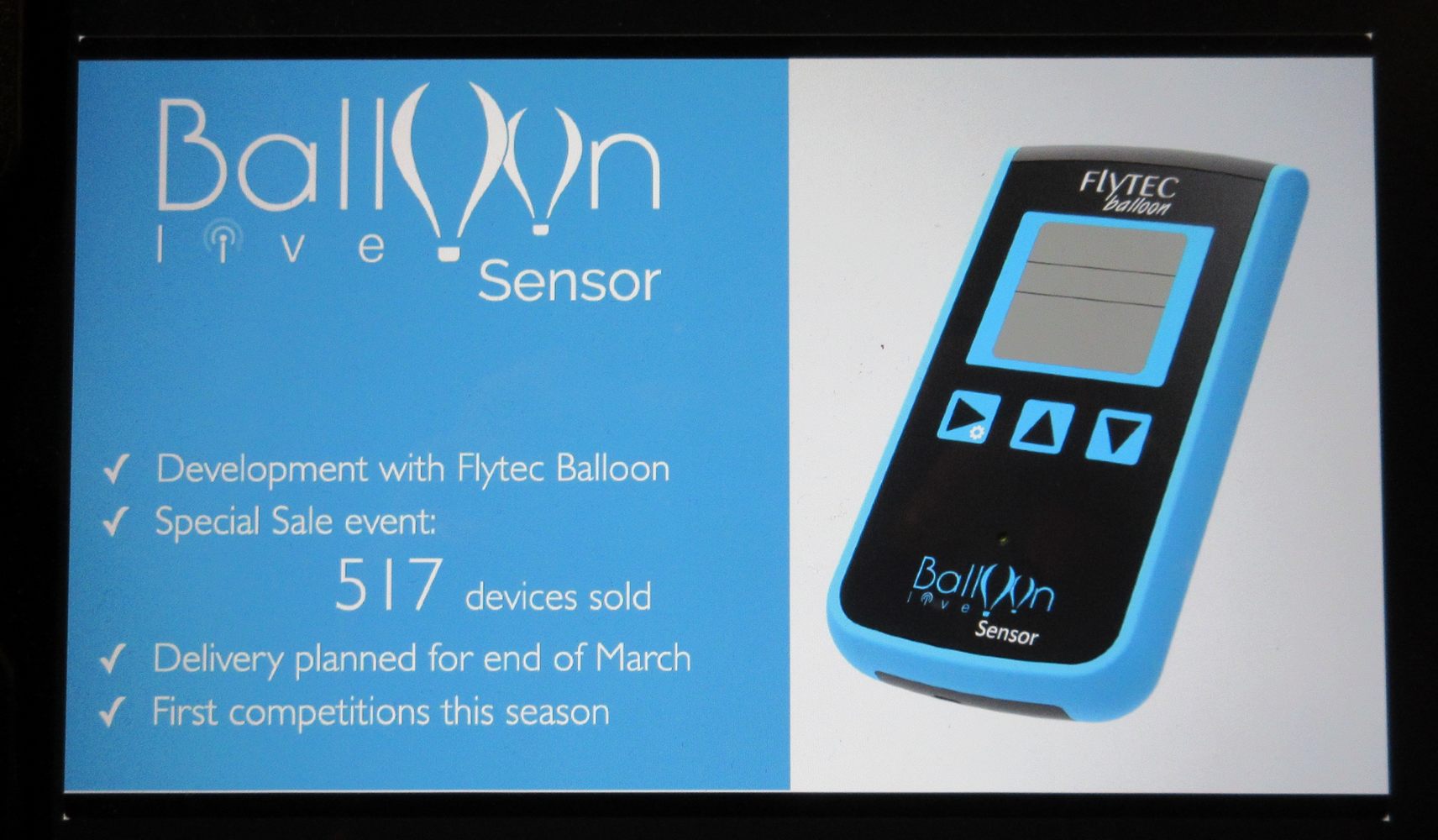 As CIA President Mark Sullivan said on the final day of the ePlenary, “now is time for the Fun Portion” of the annual meeting – announcing CIA Awards.

FAI Certificates of Appreciation were presented to:

The FAI Ballooning Hall of Fame inductees for 2021 were announced:

Congratulations to all the recipients. 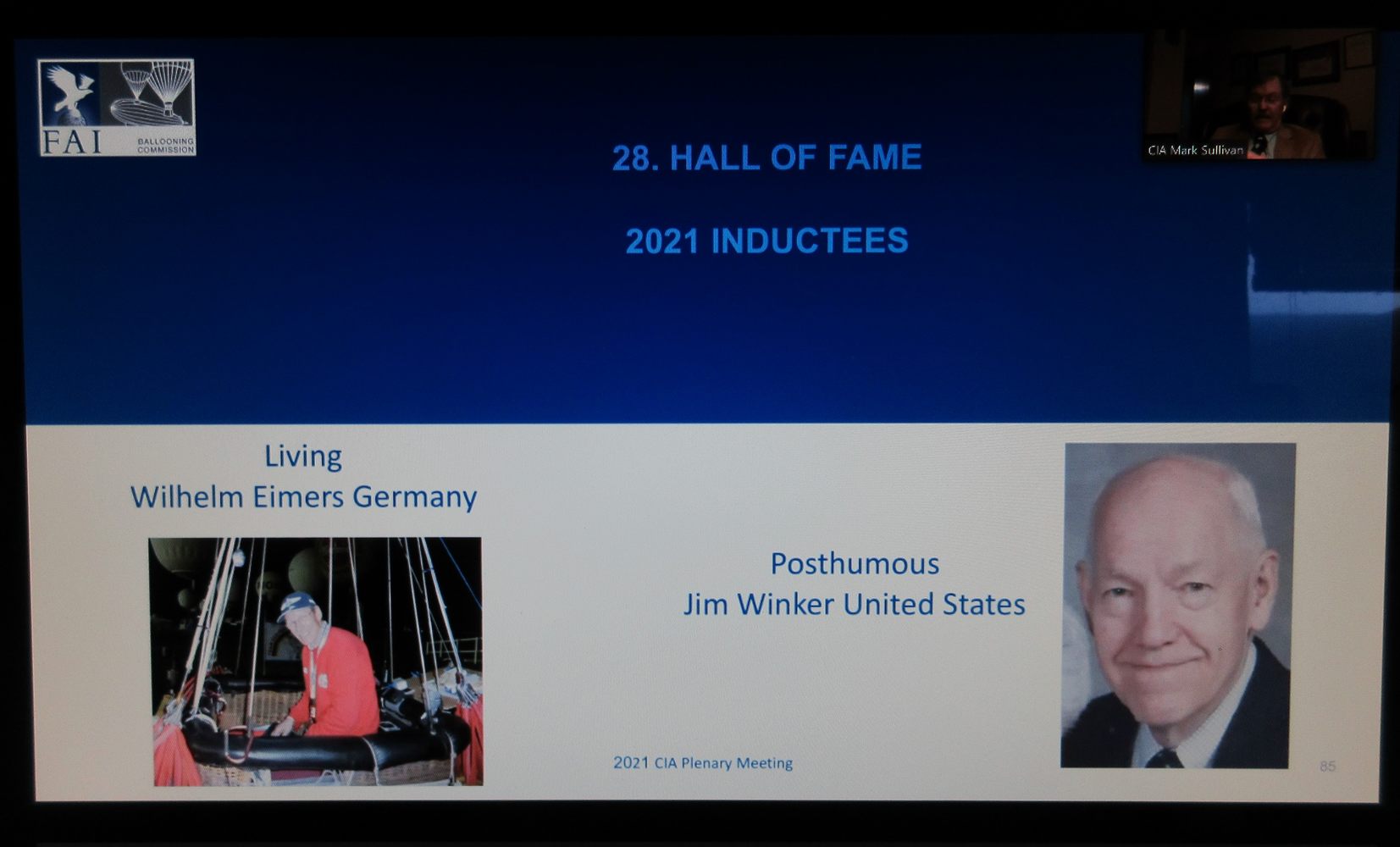 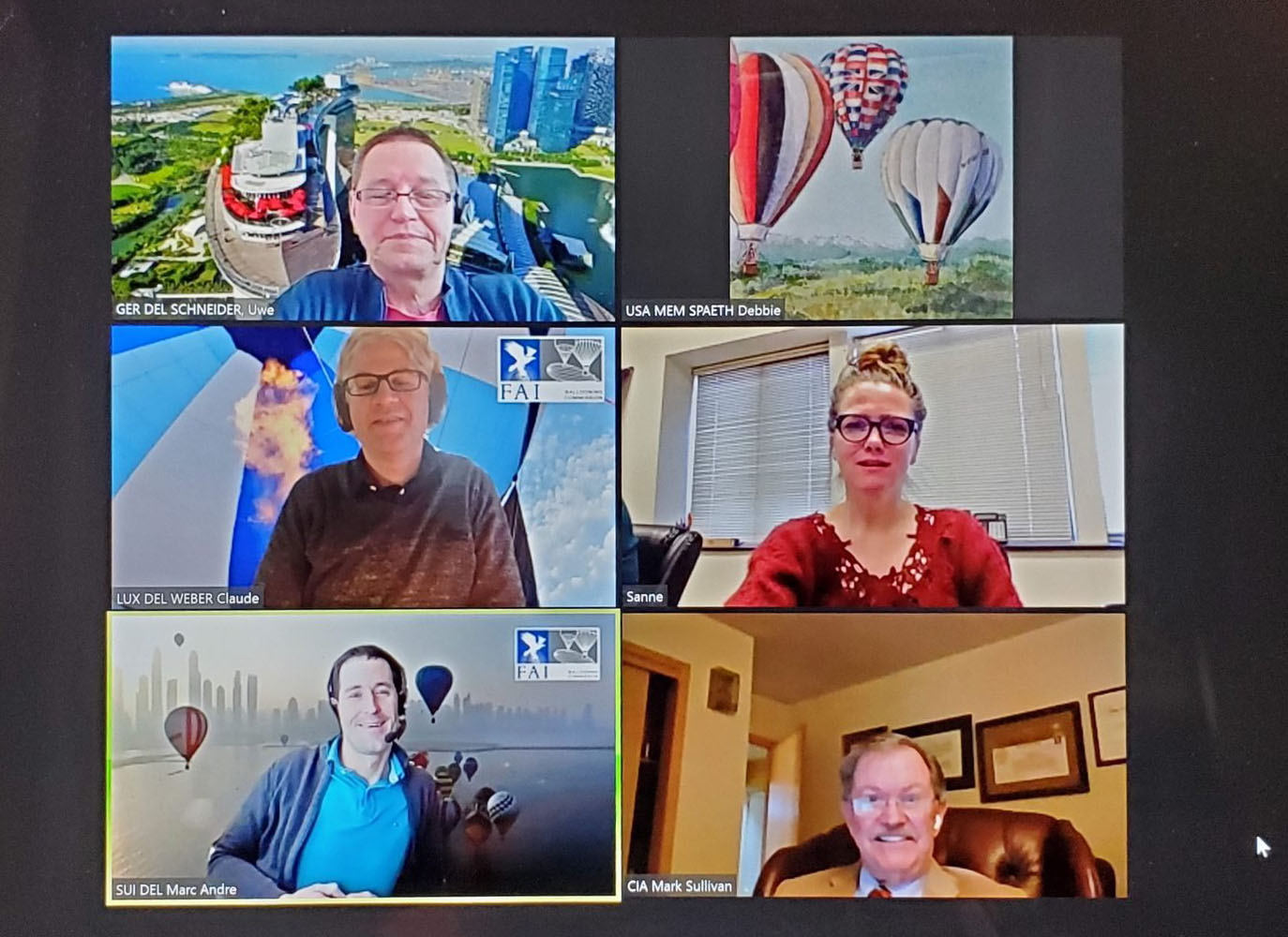 The 2021 CIA ePlenary finished on Friday. And delegates relaxed and socialized at the “International Ballooning Embassy” hosted on the Wonder.me social App. Each person had a bubble that could be moved between larger group bubbles. It was fun to socialize with CIA ePlenary attendees and join a variety of conversations.

NOTE: Complete minutes of the 2021 ePlenary meeting will be found on the CIA Documents page.