Armenians are all over the world due to the extensive Armenian diaspora. Almost 7 million Armenians live in different countries of the world. And some of them are balloonists like my family, Manuk, Nairi, and I.  For sure, being Armenian connects us, but also the fact of sharing the same passion, ballooning. This passion connects not only Armenian but all balloonists around the world, introducing me to fascinating and unique people.  In general, I consider any balloonist in the whole world as my friend.

I am Aline Anuch Kalousdian (27).  I was born in Sao Paulo, Brazil, am living in Germany, and writing my master thesis in the process engineering field.

My challenge in Austria was to understand the Styrian Austrian German dialect, which I succeeded within two months. Armenian was a little bit bigger challenge since Armenian holds a different alphabet and sounds. However, I am learning and, after every class, understanding better and better. Maybe, when Nairi Barseghyan and I meet at the European championship, I can practice a little bit. 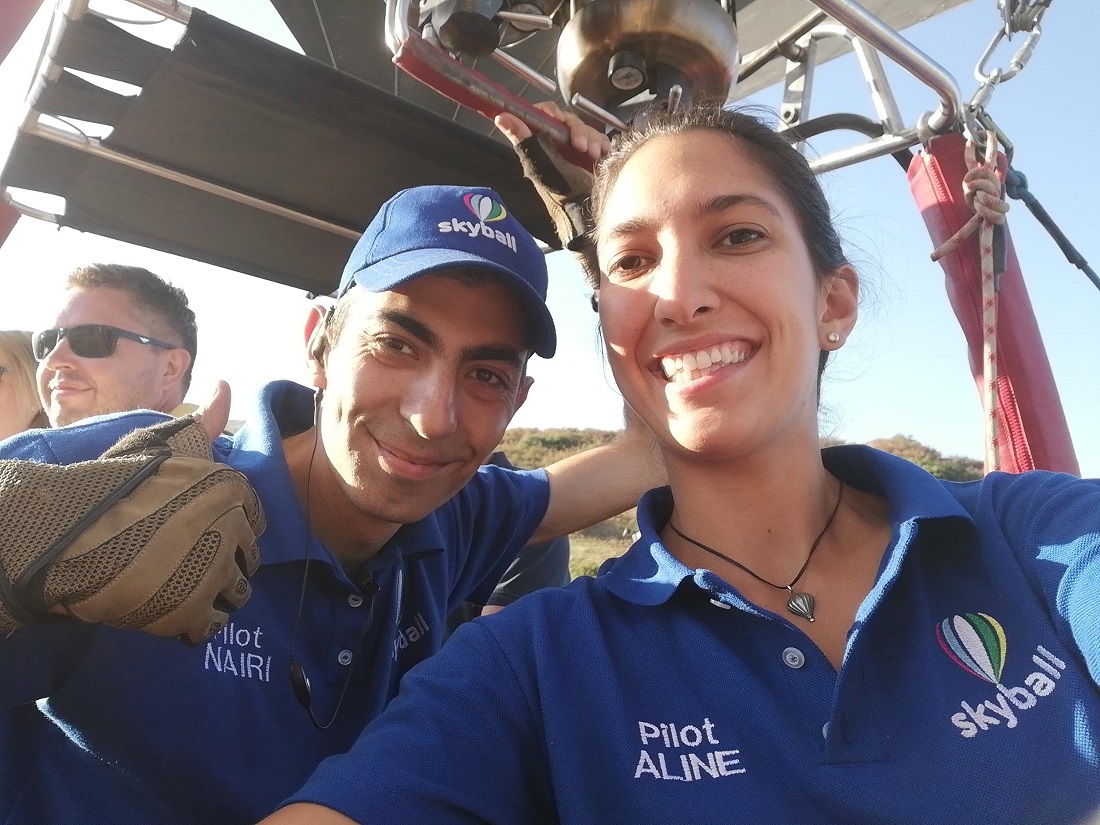 In Armenia by a hot air balloon

Before starting my Master's studies, I decided to spend two months in Armenia (Հայաստան - Hajastan). I applied to the Birthright Armenia program, which provides an opportunity for diaspora Armenians to return to their motherland to volunteer. A few months after the application phase, I was accepted, and the next step was to choose an area of work. To ensure a connection with my Master's studies in process engineering, I chose voluntary work in the engineering field. However, I was sure that I would connect my visit to Armenia with Ballooning in Armenia.

Before arriving in Armenia, I contacted Nairi telling him that I would be coming to Armenia through volunteer work program. And that I would be staying there for two months. Nairi was very happy to hear that. Moreover, he was glad that, finally, someone from the Kalousdian family would be coming to Armenia. He has been inviting us for many years since we, the Kalousdian family, got to know him through social media/the internet.

During my first two weeks in Armenia, those responsible for the Birthright Armenia program showed me how it is to live and work in Armenia. Further, I had been presented to my host family and my work colleagues, and my boss. Also, during these weeks, I contacted Nairi, saying that I am there and would like to get to know him personally. A few days later, I was invited for a balloon flight.

On the day of the balloon flight, I was picked up by Manuk Gasparyan at my host family in Yerevan at about 5 a.m. The city of Yerevan was still sleeping while we picked up all crew members and drove to the garage where the balloons are stored.

On this dark morning, I met Nairi for the first time in person, and I received the information that Armenia has two pilots. The second is Manuk, who picked me up. At that moment, I was so happy to hear that Armenia already had two hot air balloon pilots!

After attaching the balloon trailers, we continue the journey by picking up the passengers in Yerevan. Then, we drove to Garni, where Nairi and Manuk fly.

Garni is a small town - or rather a village - in Kotajk province. Garni is located about 30 km east of Yerevan and at an altitude of 1,400 m MSL. The roads to Garni are not very good. For this reason, we drove at a maximum speed of 55 km/h. Getting in Garni, we took another road, this time an off-road, which led us to the launch field. 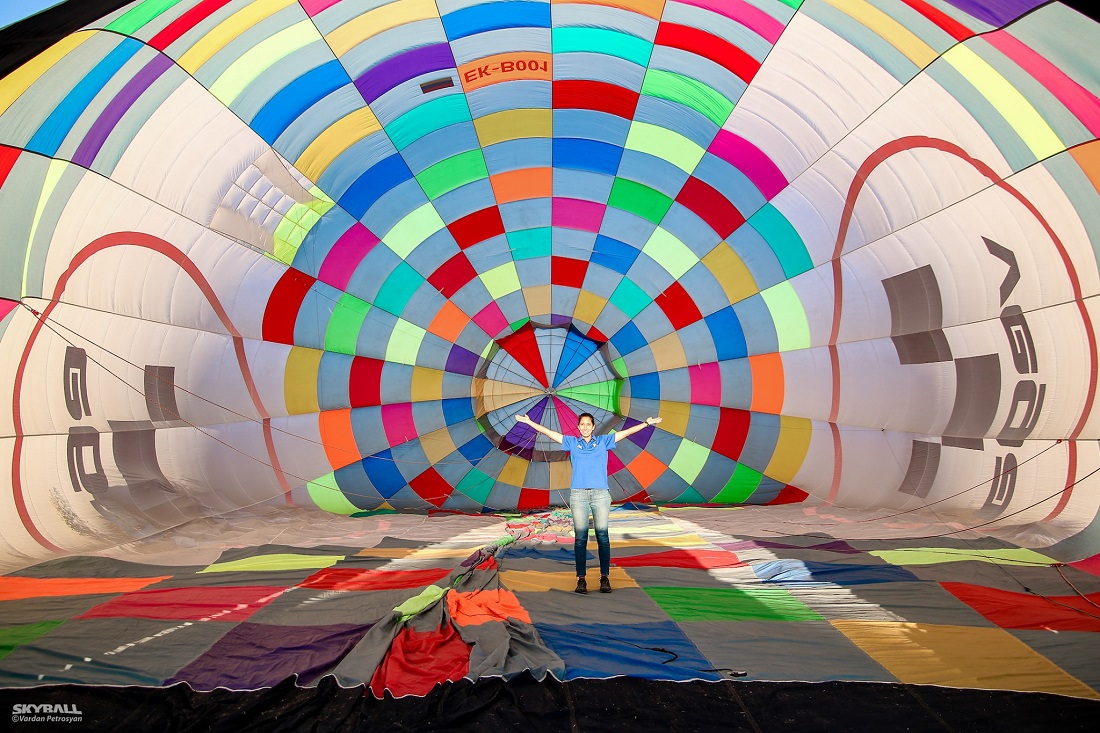 The weather was great for a balloon flight. The wind directions were good and weren't sending us to the Khosrov Forest State Reserve in the south-southeast. When the wind direction is to Khosrow, Nairi cancels the flights because there are no roads or trails in the protected area. When we were ready to take off, Nairi asked me to enter the basket. I was so thrilled!

We took off! The higher we got, the more beautiful. The sky was so clear! It was wonderful! We could see Mount Ararat. Mount Ararat is the national symbol of Armenians, although it is located in Turkey due to historical events. Ararat is divided into two mountains: the Great Ararat (about 5,140 m MSL), which is called Մասիս Masis or Արարատ Ararat and the Small Ararat (about 3,900 m MSL) which is called Սիս Sis.

We flew over Garni for more than an hour. From above, I could understand why I was told that Armenia was made of stones. The landscape is mainly composed of rocks, though there are many peach and walnut fields/plantations. 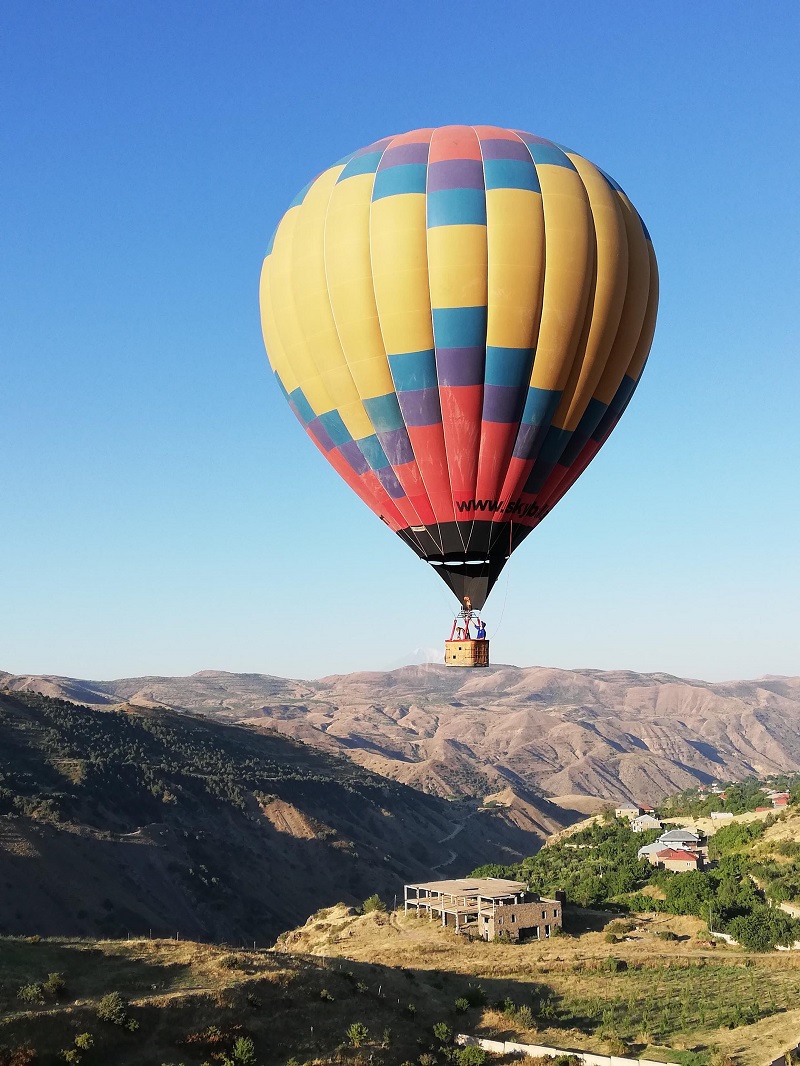 From the air, we could also see the ruins of the Garni fortress. The most famous ruin of the region is located there, the temple of Garni. During the flight, I also had the feeling that the area was a car graveyard. Everywhere you could see whole cars or parts lying on the floor.

After landing, the passengers were baptized with champagne. Then, without hurry, they sat in the landing area and enjoyed the unique, beautiful view in the direction of Mount Ararat. Fruits and drinks were offered, and typical Armenian music was played in the background. Thus, a very cozy environment was created. When everything came to an end, all passengers were brought back to Yerevan, and I returned to my host family. 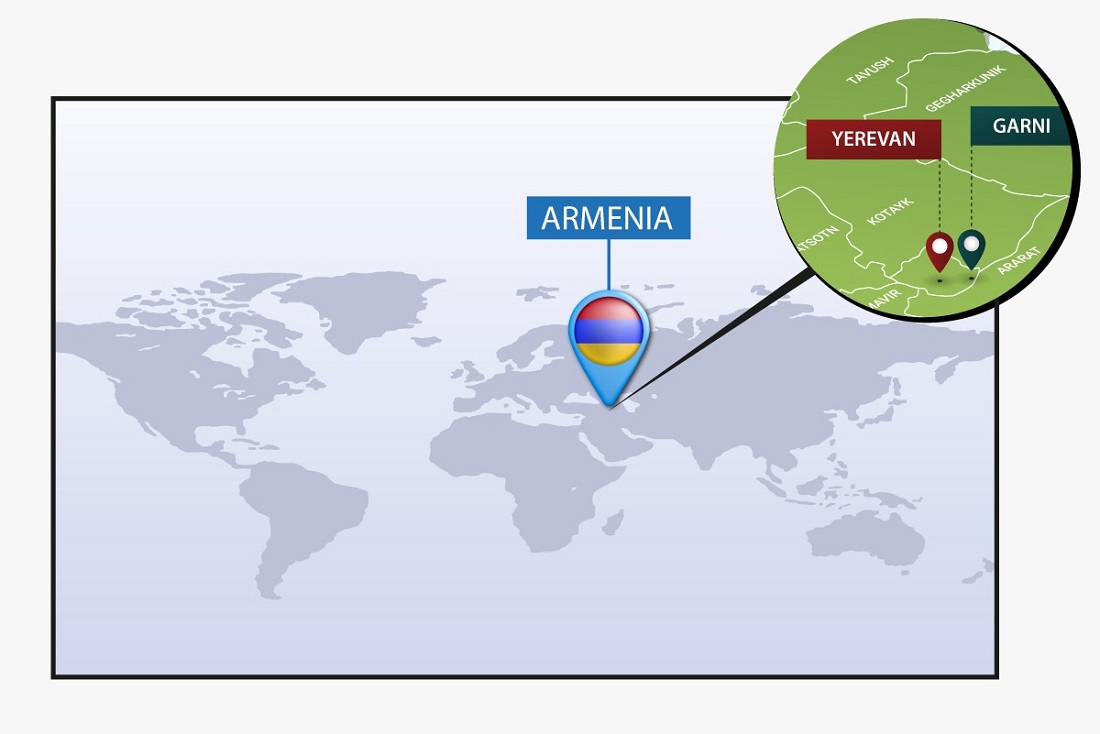 These unique experiences with Nairi, Manuk, and ballooning, made me reduce my volunteer time at the engineering company and began new volunteer work at Skyball, Nairi’s balloon company. At least four times in the week, I was with Nairi and his team. I was warmly welcomed by the whole team and Nairi's family. I gained a lot of experience as a pilot, crew member, and intern at Skyball.

During my stay in Armenia, we (Skyball) organized an international balloon festival. The festival was organized for state independence day (September 21, 1991). Pilots from Russia, Georgia, and Bulgaria arrived for it. Balloon flights were held in Garni, Gyumri, and Yerevan. In Gyumri and Yerevan, we took off from Republic Square, the middle of the city. 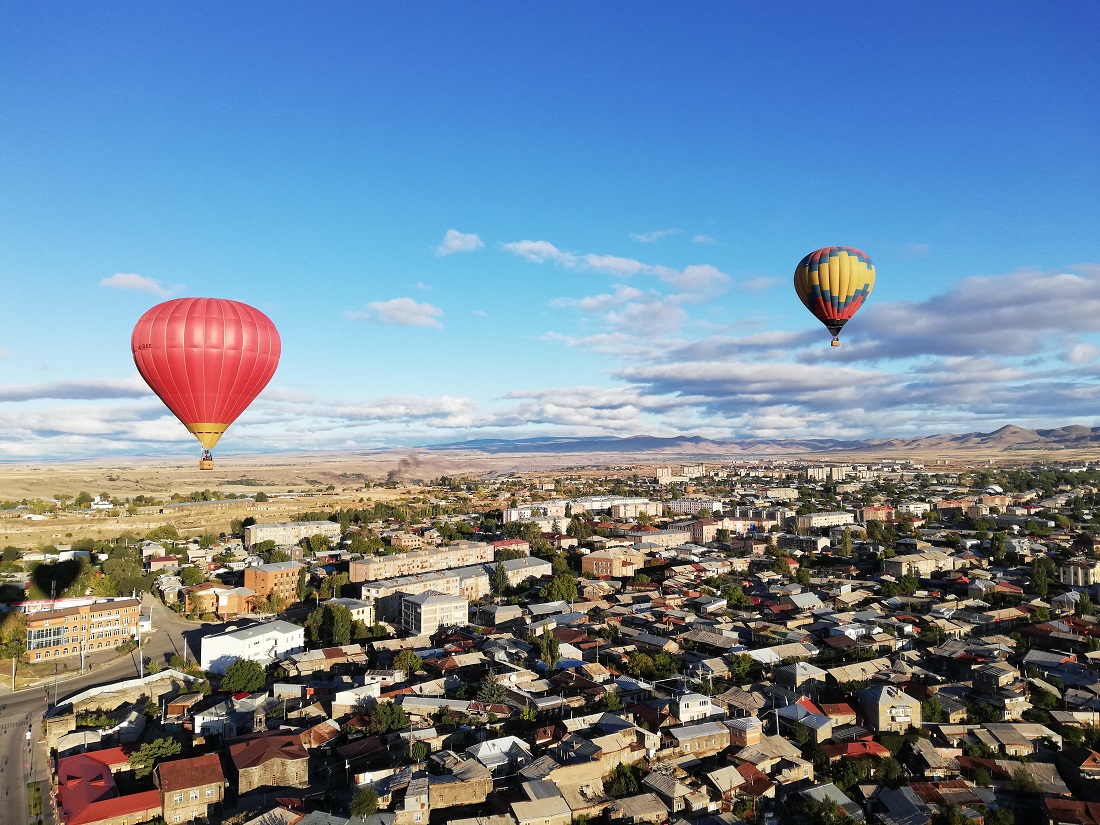 Various historical monuments could be seen from the air, and so I also understood Armenian history better. The festival was fantastic! The weather allowed us to fly all planned flights. To celebrate everything, a big party with a lot of Armenian food, music, and dance was organized!

A couple of weeks after the festival, my stay in Armenia was coming to an end. It was sad to leave, but I was happy to be there and got to know amazing people and families. Furthermore, after my stay, I could finally say that I got to know the Armenian culture in a special way. Through balloon flights, I explored the Armenian motherland from above. Through Nairi's and Manuk's families, I allowed myself to experience Armenia from the ground. All these great memories I gathered are due to the friendly, loving people from the ballooning field. These memories will be unforgettable. 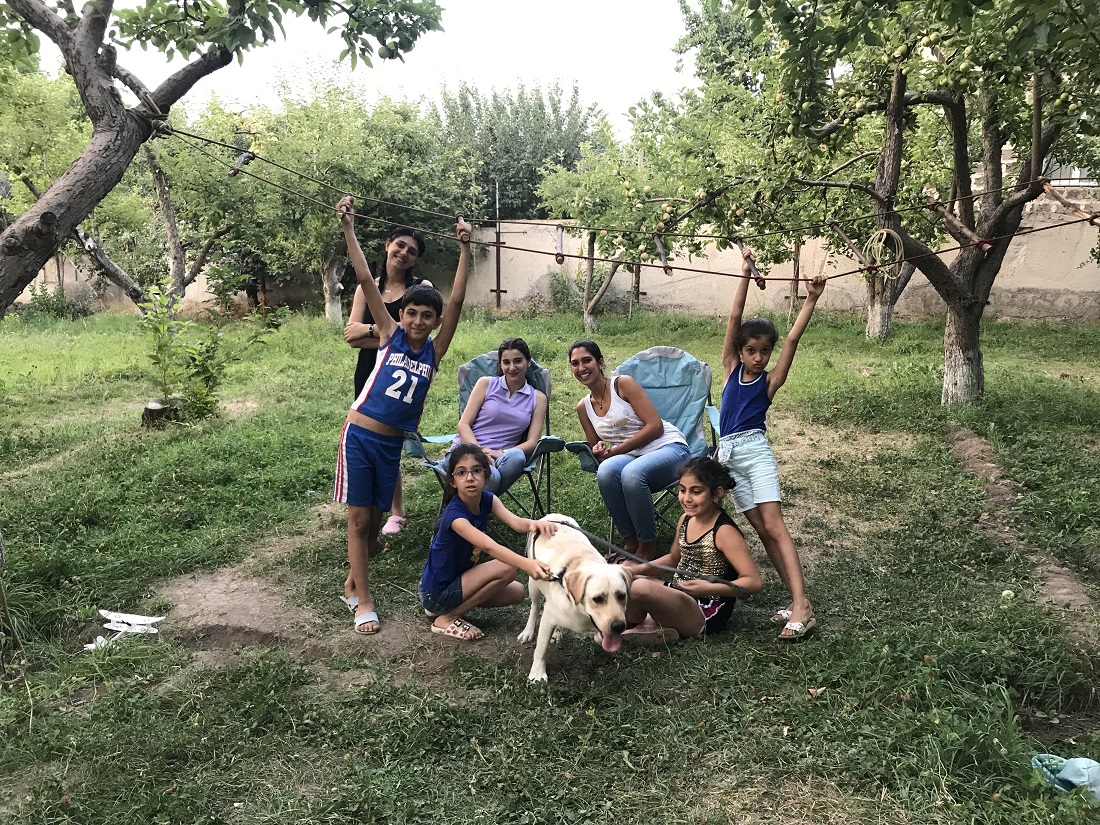