Congratulations to Garry Lockyer (CAN), recipient of the 2022 CIA Montgolfier Diploma for Contribution to the sport of Ballooning

It’s 2:45 in the morning and I stroll into the hotel lobby. Garry Lockyer is already there, looking through the latest NOAA Ready sounding and planning out this morning’s flight in his mind. He’s been doing this for 40 years and doesn’t intend to give it up yet. That’s the life of a Competition Director who has been recognized for his lifetime contribution to ballooning as the 2022 recipient of the CIA/International Ballooning Commission Montgolfier Diploma.

I’m not the first person to be privileged enough to sit next to him. On this particular morning, we’re going to the Saint-Jean-sur-Richelieu, Quebec airport and its Competition Centre for the 2021 Canadian Championships where I’m lucky enough to have the title of Deputy Director. And I am fortunate to be the most recent of the many balloonists he’s mentored around the world to make better hot air balloon competitions.

“Garry is one of those looking out for the good of the sport of ballooning,” says longtime friend and collaborator Debbie Spaeth. “He’s very deserving of the CIA Montgolfier Diploma for Contribution to Ballooning.”

“Garry’s enthusiasm for the intricacies of balloon competition and event scoring were obvious from the first time I met him,” she recalls. “I was the Deputy Event Director, with Tom Sheppard, Event Director, for the 1981 World HAB Championships in Battle Creek, Michigan. It seemed that Garry spent 98% of the Championship in the backroom of the Scoring trailer, writing code when the local software company let us down. Garry was a behind-the-scenes, unsung hero for sure!” 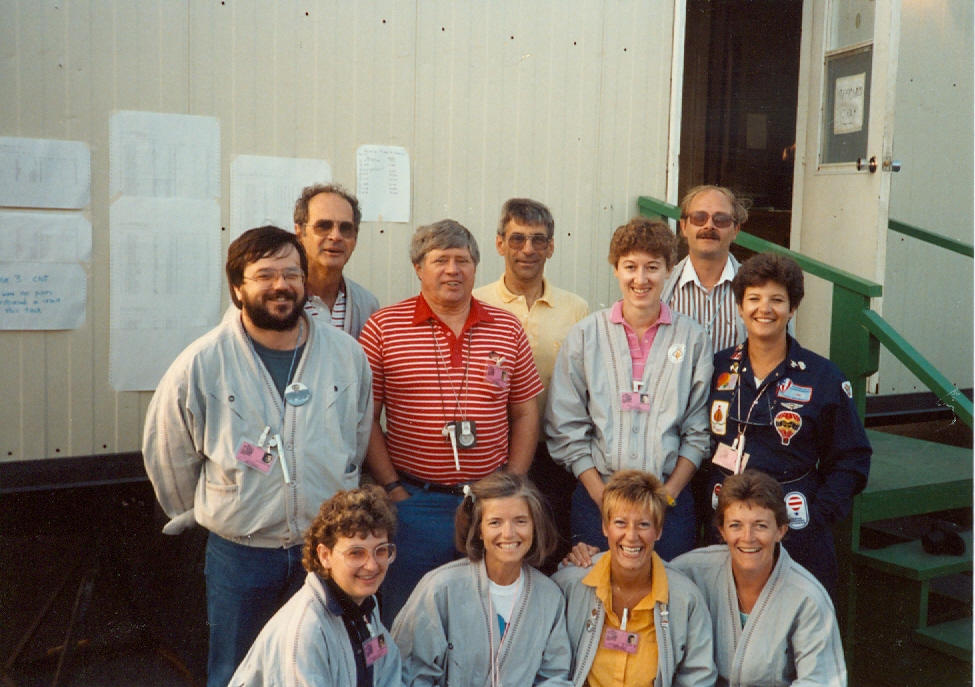 Lockyer and other officials pose in front of the Official Notice Board at a competition
in St-Jean-sur-Richelieu, QC in 1988, a few years ahead of the Worlds that he would direct there. Credit: Debbie Spaeth

A keen student of the Event Director styles displayed at early Canadian Nationals, by Nigel Tasker (UK) and Tom Sheppard (USA) and at later events, by Les Purfield (UK) and Masashi Kakuda (JPN), Lockyer rose to prominence in the Canadian ballooning circuit of the 1980s. He flew balloons out of Calgary before work brought him to Ottawa. In Ottawa, he actively helped develop a number of balloon events including nearby Saint-Jean-sur-Richelieu, Gatineau, Brockville and more. He directed the 1985 Destination Canada Balloon Race, the World Hot Air Balloon Championship in Saint-Jean in 1991 and brought the World Hot Air Airship Championship to Gatineau in 1998.

Competition Director Garry Lockyer reads out competitor numbers ahead of the first flight at Destination Canada 1985 held in Ottawa, Ontario

Over time, his expertise was sought around the globe with frequent visits to balloon competitions and events in Japan, Australia, the USA and across Europe.

“He is great at switching hats, depending on the role in a competition and he is a great jury member and president,” says Swiss colleague Marc André. Indeed, over time he’s frequently been asked to jury World Juniors, World Championships and more. 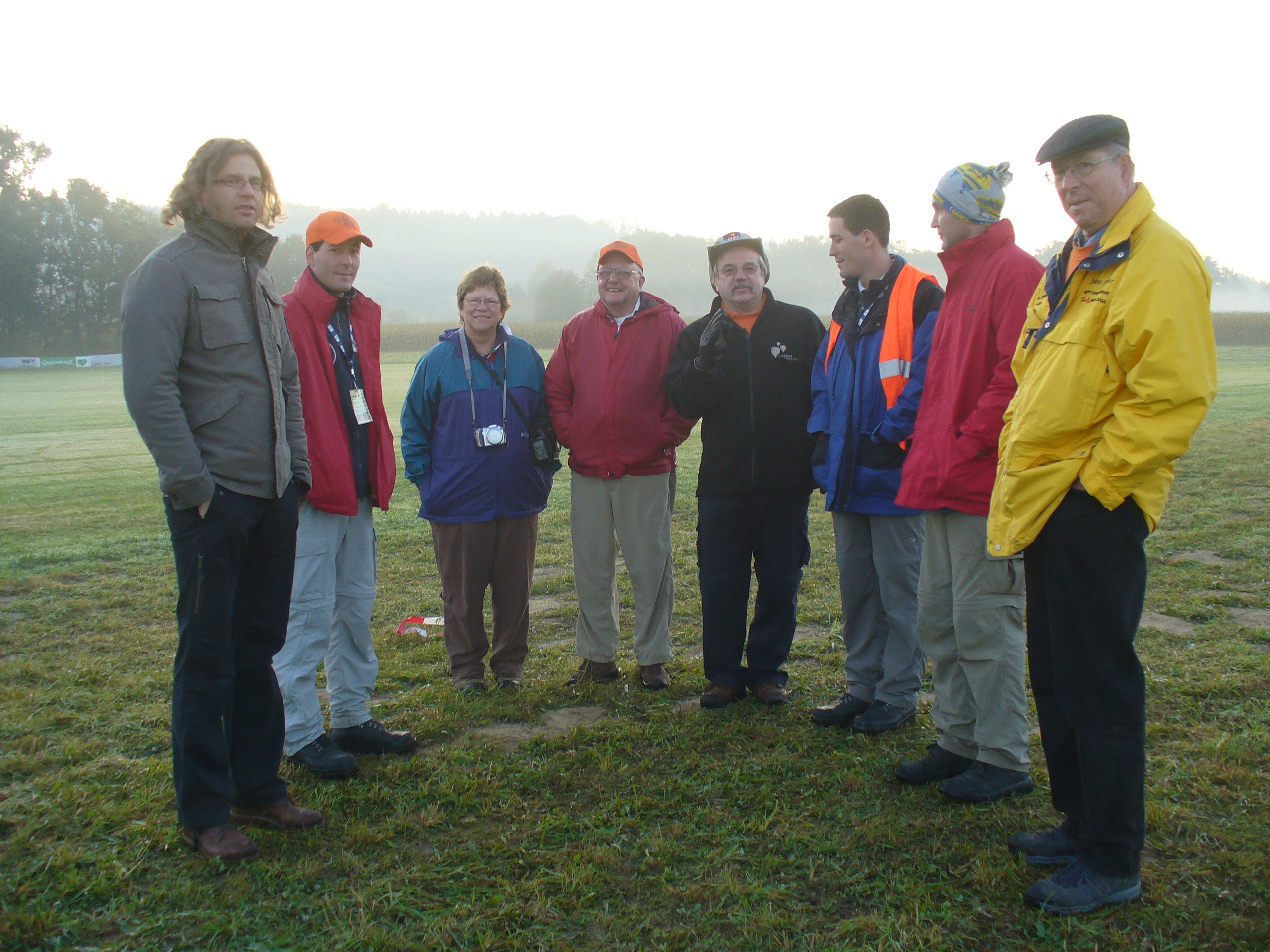 Lockyer, Marc André and others huddle around in a familiar scene at the 2007 Pre-Worlds in Austria.
Lockyer’s only appearance as a competitor in the Worlds was at the 1987 edition also in Austria. Credit: Marc André

“I first met Garry in 2007 at the CIA Plenary,” explains André. “He immediately invited me as a scorer for the Pre-Worlds in 2007 in Austria and the Luxembourg Balloon Trophy in Luxembourg. He was a great teacher and mentor, and we scored many events together since.”

“He was instrumental to "professionalize" the scoring by not just developing eKLIPS, but also by introducing the process and team concepts. The chief scorer should not be the person entering data, but the person managing the scoring team, controlling the process flow and dealing with issues.” 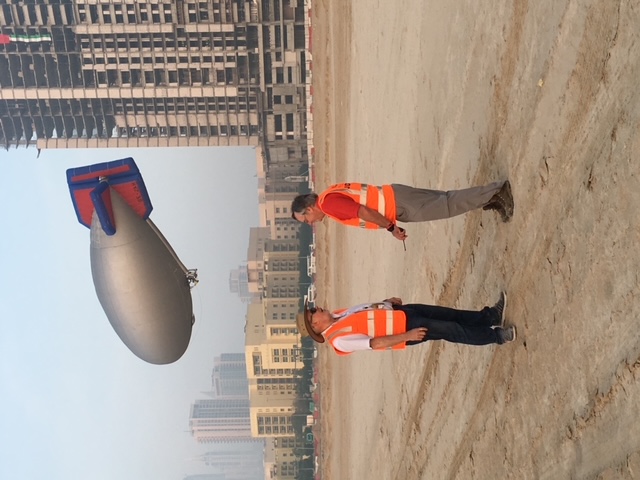 Lockyer chats with a fellow official as a hot air airship flies by in the background
and in front of the Dubai skyline at the World Air Games in 2015. Credit: Cheryl Lockyer

“When Garry developed his eKLIPS scoring software,” adds Spaeth, “he included his international circle of ballooning friends to harness their collective experiences and expertise in balloon competition. And eKLIPS has served as an international standard for event scoring for many years.”

As a kid, I admired Garry as the Balloonmeister of the Gatineau Balloon Festival which was one of the world’s largest events at the time. I didn’t know him personally then, but as my own involvement in ballooning grew, I got to be in the competition office with him at incredibly early hours. At first, it was to read pibals with the theodolite. One time, during the 2014 Canadian Championship, it was snowing lightly in High River, Alberta. I asked whether I should still go out. “That’s what you’re here for” was more or less the response. 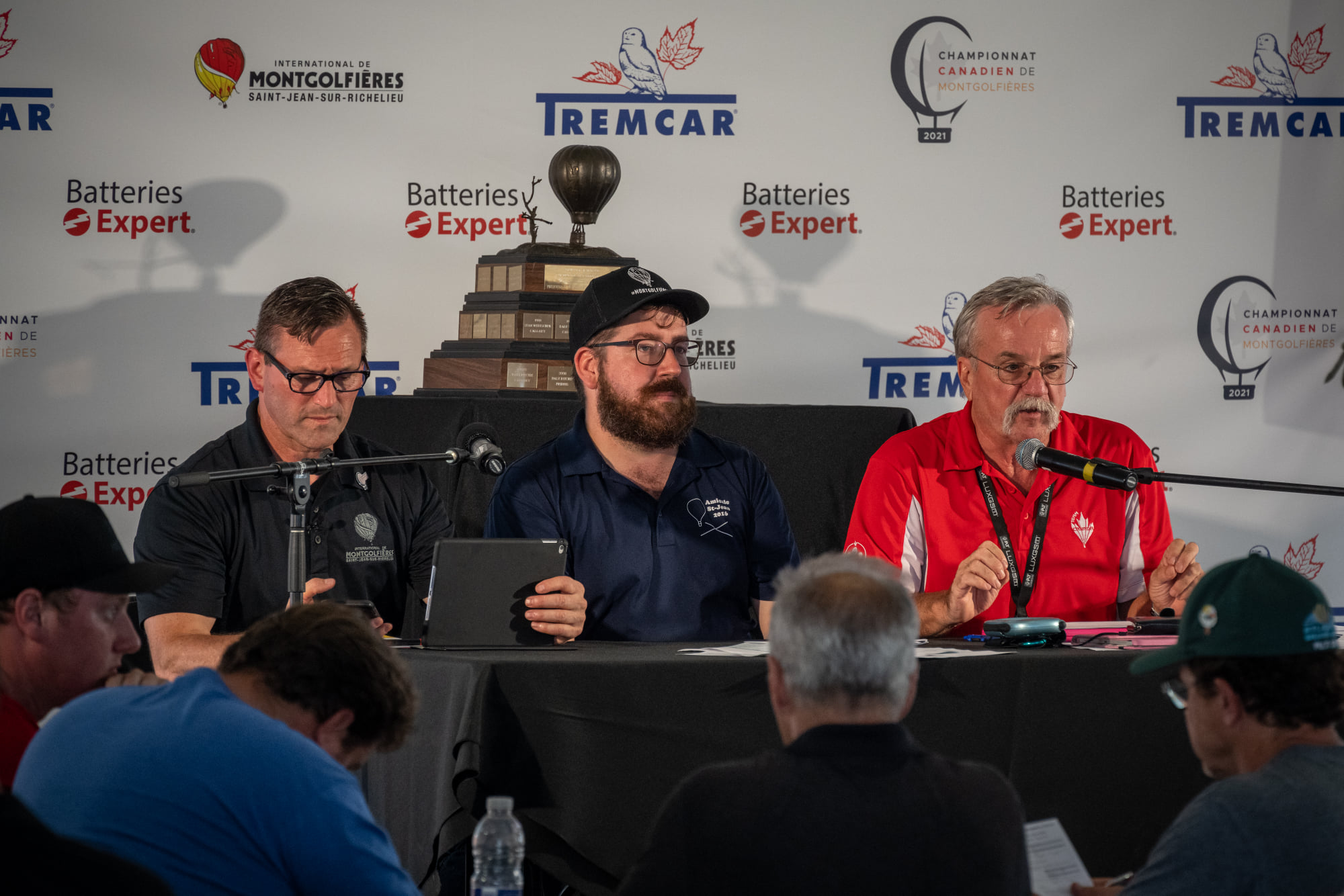 Lockyer directed the Canadian Championship for the eighth time in 2021. This author got to sit next to him, middle, along with Safety Officer Sylvain Tremblay, right.
Credit: International de montgolfières / Jacinthe Brault

Once I’d be back inside with wind data in hand, he’d explain what his considerations were as he planned the flight. As I started organizing my own events, those lessons were applied line-by-line. My best move was to ask him to direct the 2021 Canadian Championship. He hadn’t been to Saint-Jean often in the nearly 30 years since the Worlds were held there. Sadly, his favorite burger place had shut down.

André recalls a scenario from the 2011 European Championship in Lleida: “I was Chief Scorer and Garry was the Jury President. After the first flight was scored, he called me into a Jury meeting and said "Marc, you are in big trouble." I replied: "Well, everything I did, I learned from you." (which is true!) and the other Jury members started laughing. Of course, it was all fine. It was just Garry's special sense of humor.” 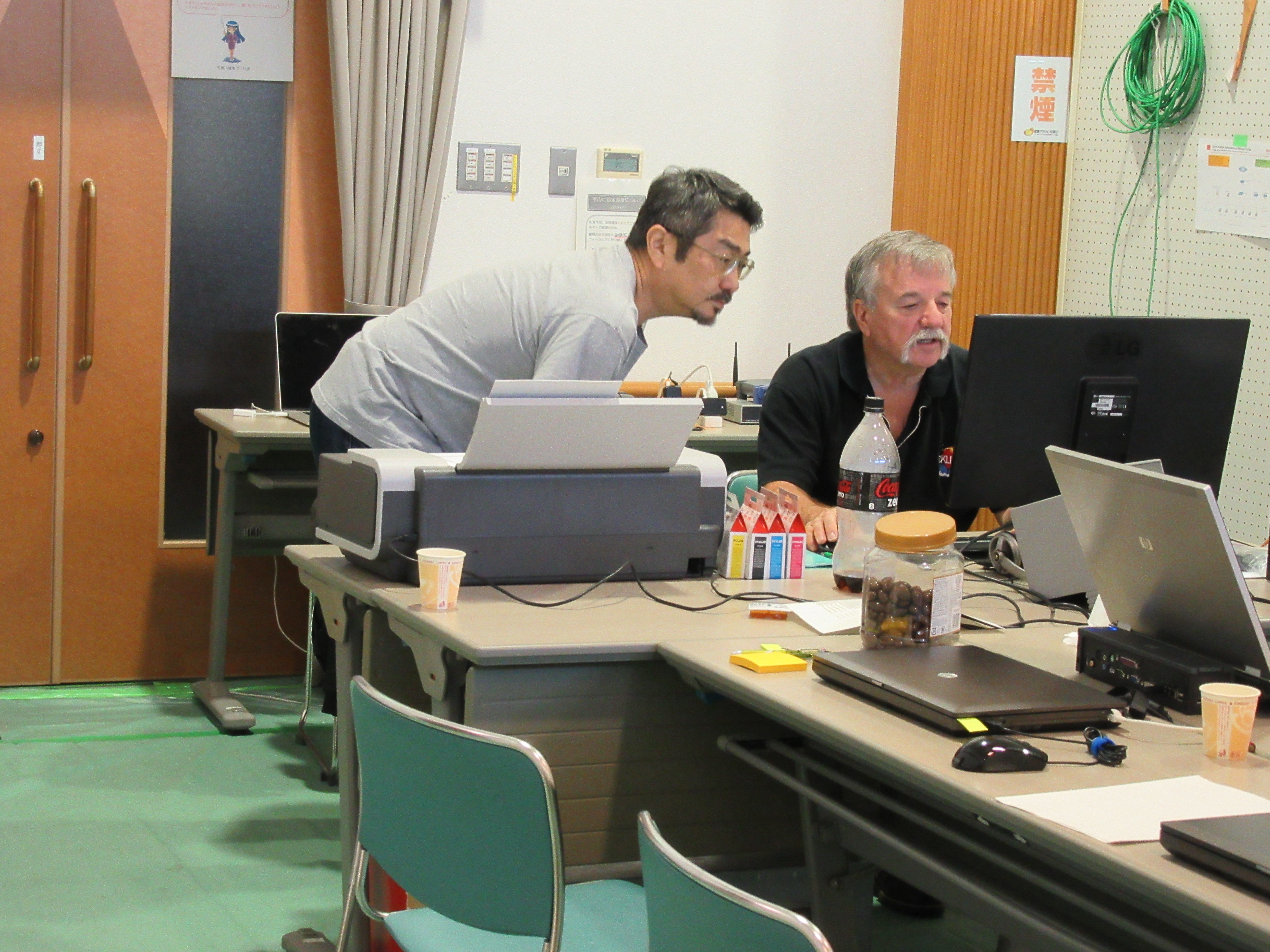 This picture could have been taken anywhere in the world, with Lockyer deep in thought and scoring an event.
It happens to be from Saga, Japan where he’s spent a lot of time supporting competition over the years. Credit: Debbie Spaeth

Lockyer is still keen on playing a mentorship role for both Canadian balloonists and those elsewhere who are looking to advance competition, scoring, jury and more. While I’ve appreciated receiving that mentorship, a real thrill was to see Lockyer’s son Shane become a pilot and compete in last year’s Canadian championship. While of course Garry had to maintain a professional distance, it was great to see the understated pride he felt to see his son join in his father’s footsteps, not just as a pilot but as a competitor. The elder Lockyer won the Canadian Championship as a competitor in 1986, so Shane has a goal to match his father as a next generation Canadian Champion.

“Balloons were always a part of my life, because my dad was officiating in so many different events,” says the younger Lockyer. “I grew up watching the passion and enthusiasm that he brought to competition ballooning in particular, and was inspired by his commitment to the sport.”

Garry Lockyer, far right, was proud to have his son Shane, next to him, compete during the 2021 Canadian Championships.
The closest they got was likely this photo of Shane’s team as it was quite busy in the office. Credit: Emma Wilde Lockyer

“My dad got back into flying when he bought his balloon about 10 years ago, and this led me to find my own passion for flying. After crewing for him for a few years, I completed my own license. Now, we get to fly side-by-side!” 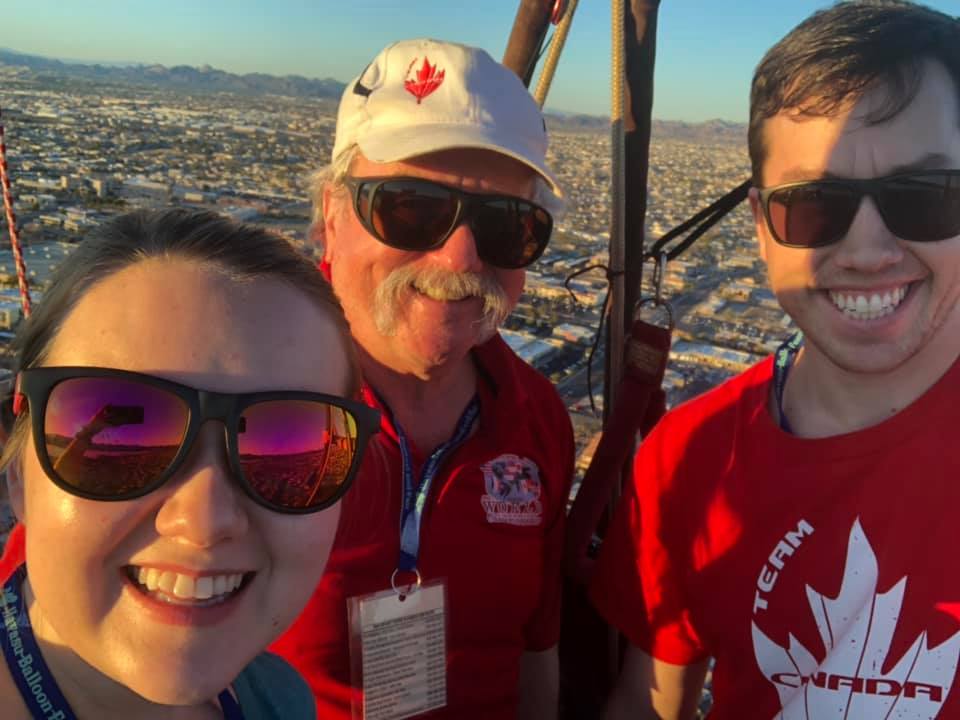 The Competition Director for the upcoming Canadian nationals (2022 and 2023) and North American HAB Championships (2023), Lockyer still enjoys supporting and participating in events in Australia, Japan and elsewhere. And getting to see the many friends he’s made over the years in ballooning.

Next time you see Garry Lockyer, remember to congratulate him on his well-deserved Montgolfier Diploma for contribution to the sport of Ballooning! Bien mérité, Garry! 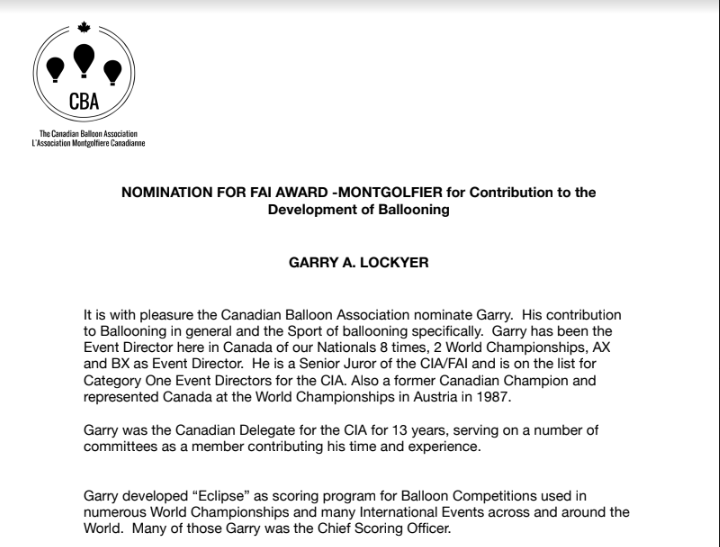